The Legend of Princess Angeline

Born c. 1820 in what is now Rainier Beach, Washington, Kikisoblu, the eldest daughter of Chief Seattle is recognized around the world as Princess Angeline.

Princess Angeline became famous as the subject of one of the earliest portraits taken by Edward Sheriff Curtis while he was creating his prodigious and enduring photographic record of Native American life. Curtis found Angeline living in a shack with her dog on the Puget Sound waterfront in 1896 and made a photogravure of the old and wrinkled woman in his Seattle studio. Another photo of Angeline, The Mussel Gatherer, was taken near the shore.

Wrapped in a shawl, wearing a handkerchief over her head, the aged Angeline was often seen walking around Seattle, bent over her cane, selling hand-woven baskets and doing people’s laundry to earn her own living.

An ancient Duwamish story, “North Wind, South Wind,” tells of the last Ice Age, indicating how long Angeline’s people had lived on their land. When the first American settlers, some say “interlopers,” arrived in 1851, Chief Si’ahl, leader of the Suquamish and Duwamish tribes, walked a path of accommodation, making friends with some of the settlers, most prominent among them David “Doc” Maynard, who repaid the favor by calling the city, Seattle, an anglicized version of the chief’s name.

Angeline’s given name in the Lushootseed language was Kikisoblu, but Doc Maynard’s wife, Catherine, renamed her. “You are too good looking a woman,” she said, “to carry around such a name as that, and I now christen you Angeline.”

After Chief Seattle signed the Treaty of Point Elliot in 1855, the Suquamish people were forced from their tribal lands to relocate to a reservation across Puget Sound. Angeline refused to leave. She simply ignored the order and stayed in her home on Western Avenue near what is now Pike Place Market. She insisted on living and dying in Seattle.

Because of her bold and dignified manner despite her situation, she was called “Princess” by the locals. Her new friends tried to help make her life more comfortable, but Angeline wanted to take care of herself. She was often hounded by young boys who followed and harassed her. She gave as good as she got, throwing rocks at them to keep them away.

Chief Seattle was converted to Christianity by French missionaries and was baptized in the Roman Catholic Church. Following in the steps of her father, Princess Angeline became a Christian and remained in the Catholic Church until her death on May 31, 1896. Following her funeral at the Church of Our Lady of Good Help, she was buried in Lake View Cemetery on Capitol Hill.  Her coffin was made in the shape of a canoe.

Years after Princess Angeline died, her cabin was torn down, and the area became part of the waterfront until the development of Pike Place Market, where some say they still see her near the flower market, sitting on the floor with woven baskets at her feet. Princess Angeline vanishes when approached. 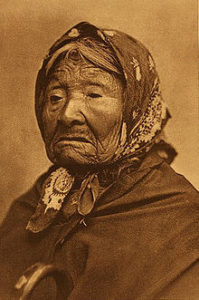