Mural, Mural on the Wall

Murals are primordial. Our ancestors painted on walls 40,000 years ago, a celebration of continuity. In modern day, murals express the concerns and aspirations of a community.

Mexican artist and muralist, Diego Rivera, painted scenes of revolution as well as everyday life on the sides of public buildings. He placed art into public view so that more people could enjoy and appreciate its beauty outside the gallery.

Where there is a blank surface, or a cement wall, there is an urban canvas. Laguna Beach artist, Wyland (one name only) painted “The Orcas of Puget Sound,” on the side of the Edgewater Hotel at Pier 67, with some assistance by Eddie Vedder of Seattle’s homeboys, Pearl Jam. It speaks to us with a powerful message as murals intend:  the orcas are endangered.

Pollution, chemicals, pesticides, increased ship traffic, declining Chinook salmon, many are the reasons why. If “we have orcas in our soul,” as Jay Inslee, governor of Washington state, has said, Wyland’s mural reminds us, we can’t let them go.

In my Lake City Seattle neighborhood, a mural project begun in 2016 continues today. Community activist, Mark Mendez, organized a teen leadership group to support local business and uplift the neighborhood with public art. Mendez met with artists who agreed to work with teens throughout the process, from concept to completion. Three years later there are 30 murals in Lake City, painted by over 100 youth. Young people, some doing court ordered community service, can take pride in their creative accomplishment, working with artists to beautify their community.

Speaking of music, murals and homeboys, portraits of Jimi Hendrix, Kurt Cobain and Chris Cornell are painted on electrical junction boxes by the side of the road. At a busy street corner, a passerby practiced arpeggios on a brightly painted upright from the pianos-in-the-park program, which not only encourages music anytime, anywhere, but also provides an instrument. Later, in the afternoon’s summer glow, an Indie rock band, La Fonda, fronted by two sisters, played for free to a diverse crowd dancing in the street.

Thirty-two thousand people live within Lake City’s 4.1 square miles, 13.5% of those residents live below the poverty line, one quarter are immigrants and refugees and half are households with children.  Forty-three percent are persons of color and there are twenty languages spoken here. Murals bring people together. They are the symbols of freedom, solidarity, and hope–the visual backdrop to a shared community.

Author Thomas Kohnstamm described my neighborhood in his novel, Lake City, as “the Seattle that fueled the melancholy of what came to be known as grunge.” Music and art define us, lift our spirits, and make us dream. 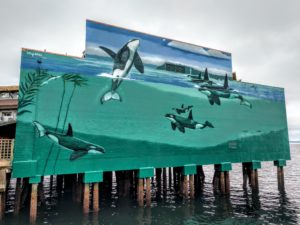 “The Orcas of Puget Sound,” by Wyland