I  published my book Planets & Passages, Tales of a Blacktop Gypsy late November 2018. My best friend, Mary Lawlor O’Hara, telephoned me on my birthday, as she always did, one week after publication. She wasn’t feeling well. In fact, she had just had a heart attack, not her first.

Rather than wait for my author copies to arrive, I bought one of my own books from Amazon and sent it to Mary priority mail. I’m so glad I did. Only days after reading and getting a big kick out of the book, in which she is often mentioned, Mary died.

Her older sister, Mickie, called to tell me that at Mary’s wake before the funeral mass, she read this story from Tales of a Blacktop Gypsy to  family and friends:

Mary Lawlor lived a few blocks from our apartment in West Hollywood. Her father, Thomas, was the Beverly Hills postmaster. Mary was one of nine children, raised in a noisy Irish-Catholic family. In the hall by her front door hung framed pictures of the Pope, the Sacred Heart of Jesus, and John Fitzgerald Kennedy.

At Mary’s house the television was always on and there was delicious confusion; I loved all the activity. The house was small for so many people and everybody shared bedrooms. Mary told me the little house with one bathroom recently sold for $3 million.

Marian, Mary’s mom, worked hard to feed three over-sized boys and six girls who consumed three gallons of milk a day and countless loaves of bread. Is it any wonder she shouted all day long?

Mary and I did everything together. We walked to  La Cienega Park to swim in the public pool for 25 cents, or we played tennis on the free courts. On the way home from the park, we would stop in Tiny Naylor’s restaurant for a hot fudge sundae. Mary always paid because I never had any money.

My parents  liked Mary and allowed me to spend a lot of time at her house. I didn’t sleep over, there wasn’t enough room. Mary spent the night at my house and on Friday nights when Mom and Dad went to the movies, she kept me company while I babysat my brothers.

A loyal and true friend, when Mom and Dad wouldn’t let me go the all-night eighth-grade chaperoned party, Mary stayed home with me. Before we could drive, she and I would stroll down Restaurant Row just a block from her house and flirt with the cute guys who parked cars.

We took the city bus to the Polar Palace to ice skate and to the Los Angeles County Museum on Wilshire Blvd. where we laughed at the modern art. “We could’ve painted that,” we said. The La Brea Tar Pits bubbled mysteriously in front of the museum and we threw things into the black ooze to watch them sink, sucked down with the dinosaur bones.

Mary got her driver’s license before I did and drove a  late 40’s metallic blue Pontiac. She drove us to Notre Dame Academy our junior and senior years, and we would cruise Scot’s drive-in hamburger joint on Pico Blvd. Saturday nights. Mary was matron of honor when I was first married and liked to say, while she wasn’t at all my weddings, she was there for the first and the last. Beloved friend, I celebrate you. 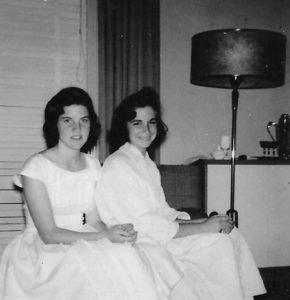